Bedbugs are small parasitic insects. The most common type is Cimex lectuarius. The term usually refers to species that prefer to feed on human blood. All insects in this family live by feeding exclusively on the blood of warm-blooded animals. A number of health effects may occur due to bed bugs including skin rashes, psychological effects and allergic symptoms. Diagnosis involves both finding bed bugs and the occurrence of compatible symptoms. Bedbugs have not been shown to transmit any known diseases at this time.

In the developed world, bedbugs were largely eradicated as pests in the early 1940s, however they have increased in prevalence in the last decade. Because infestation of human habitats has been on the increase, bedbug bites and related conditions have been on the rise as well. The exact causes of this resurgence remain unclear; it is variously ascribed to greater foreign travel, more frequent exchange of second-hand furnishings among homes, and increasing resistance to pesticides now in use. Bedbugs have been known human parasites for thousands of years.

The name "bedbug" is derived form the insect's preferred habitat of houses and especially beds or other areas where people sleep. Bedbugs, though not strictly nocturnal, are mainly active at night and are capable of feeding unnoticed on their hosts. Adult bedbugs are reddish-brown, flattened, oval and wingless. Bedbugs have microscopic hairs that give them a banded appearance. Adults grow to 4-5mm in length and 1.5-3mm wide. Newly hatched nymphs are translucent, lighter in color and become browner as they moult and reach maturity. Bedbugs may be mistaken for other insects such as booklice and carpet beetles, or vice-versa.

Bedbugs use pheromones and kairomones to communicate regarding nesting locations, feeding and reproduction. The life span of bedbugs varies by species and is also dependent on feeding. Bedbugs are obligatory hematophagous (bloodsucking) insects. Bedbugs are attracted to their hosts primarily by carbon dioxide, secondarily by warmth, and also by certain chemicals. A bedbug pierces the skin of its host with two hollow feeding tubes shaped like tongues. With one tube it injects its saliva, which contains anticoagulants and anesthetics, while with the other it withdraws the blood of its host. After feeding for about five minutes the bug returns to its hiding place. It takes between five to ten minutes for a bedbug to become completely engorged with blood.

Although bedbugs can live for a year without feeding, they normally try to feed every five to ten days. DNA from human blood meals from bed bugs can be recovered for up to 90 days, which may allow bed bugs to be used for forensic purposes for identifying who the bed bugs have been feeding on. All bedbugs mate by traumatic insemination. Because the female has no genital opening, the male pierces her abdomen with his hypodermic genitalia and ejaculates into the body cavity. Bedbugs produce a bedbug alarm pheromone consisting of (E)-2-octenal and (E)-2-hexenal. It is released when a bedbug is disturbed, as during an attack by a predator. Bedbugs have six life stages (five immature and an adult stage). They will shed their skins through a molting process (ecdysis) throughout multiple stages of their lives. The discarded outer-shells look like clear, empty exoskeletons of the bugs themselves. Bedbugs must molt six times before becoming fertile adults.

A number of health effects may occur due to bedbugs including skin rashes, psychological effects and allergic symptoms. Although bedbugs are able to be infected by at least 28 human pathogens, no study has ever found that the insect is able to transmit the pathogen to a human being. Bedbug bits or cimicosis may lead to a range of skin manifestations from no visible effects to prominent blisters. Diagnosis involves both finding bedbugs and the occurrence of compatible symptoms. Treatment involves the elimination of the insect but is otherwise symptomatic.

Dwellings can become infested with bedbugs in a variety of ways:

People visiting from a source of infestation; bedbugs, like roaches, are transferred by clothing, luggage, or a person's body. Bedbugs are elusive and usually nocturnal, which can make them hard to spot. Bedbugs often lodge unnoticed in dark crevices, and eggs can be nestled in fabric seams. Aside from bite symptoms, signs include fecal spots, blood smears on sheets, and moults. Bedbugs can be found on their own but often congregate once established. They usually remain close to hosts, commonly in or near beds or couches. Nesting locations can vary greatly however, including luggage, vehicles, furniture and bedside clutter. Bedbugs may also nest near animals that have nested within a dwelling, such as bats, birds or rodents. The eggs of bed bugs are found in similar places that the bed bugs themselves are found and are attached to surfaces by a sticky substance. Attractant devices for detection use heat and or carbon dioxide. Bedbug detection dogs are trained to pinpoint infestations, with a possible accuracy rate of 97.5%, thought that figure is based upon tests conducted under controlled condition by researchers. The success rates in these tests may not reflect real world success rates of a pest companies' dogs, operating with many more variables in the field.

Eradication of bedbugs frequently requires a combination of pesticide and non-pesticide approaches. Resistance to pesticides has increased significantly overtime. Mechanical approaches such as vacuuming up the insects and sealing mattresses in zippered mattress bags. Bedbug pesticide-resistance appears to be increasing dramatically. Bedbug populations sampled across the U.S. showed a tolerance for pyrethroids several thousands of times greater than laboratory bedbugs. New York City bed bugs have been found to be 264 times more resistant to deltamethrin than Florida bedbugs due to nerve cell mutations. A population genetics study of bedbugs in the United States, Canada, and Australia using a mitochondrial DNA marker found high levels of genetic variation. This suggests that the studied bedbug populations did not undergo a genetic bottleneck as one would expect from insecticide control during the 1940s and 1950s, but instead, that populations may have been maintained on other hosts such as birds and bats. In contrast to the high amount of genetic variation observed. This suggests increased gene flow of previously isolated bedbug populations, and given the absence of barriers to gene flow, the spread of insecticide resistance may be rapid.

Natural enemies of bedbugs include the masked hunter (also known as "masked bedbug hunter"), cockroaches, ants, spiders (particularly Thanatus flavidus), mites and centipedes. The Pharaoh ant's (Monmorium pharaonis) venom is lethal to bedbugs. Biological pest control is not very practical for eliminating bedbugs from human dwellings. Bedbugs occur around the world. Rates of infestations in developed countries, whiles decreasing form the 1930s to the 1980s, have increased dramatically since the 1980s. Previous to this they were common in the developing world but rare in the developed world. The increase in the developed world may have been caused by increased international travel, resistance to insecticides, and the use of new pest-control methods that do not affect bedbugs. The fall in bedbug populations after the 1930s in the developed world is believed to be partly due to the usage of DDT to kill cockroaches. The invention of the vacuum cleaner and simplification of furniture design may have also played a role. Others believe it might simply be the cyclical nature of the organism.

The common bedbug (Cimex lectularius) is the species best adapted to human environments. It is found in temperate climates throughout the world. Other species include Climex hemipterus, found in tropical regions, which also infests poultry and bats, and Leptocimex boueti, found in the tropics of West Africa and South America, which infests bats and humans. Cimex pilosellus and Cimex pipistrella primarily infest bats, while Haematosiphon inodora, a species of North America, primarily infests poultry. C. lectularius may have originated in the Middle East, in caves inhabited by bats humans. Bedbugs were mentioned in ancient Greece as early as 400 BC (later mentioned by Aristotle). Pliny's Natural History, first published c. 77 AD in Rome, clamed that bedbugs had medicinal value in treating ailments such as snake bites and ear infections.(Belief in the medicinal use of bedbugs persisted until at least the treatment of hysteria.) Bedbugs were first mentioned in England in 1583, though they remained rare in England until 1670. It was believed by some in the 18th century that bedbugs had been brought to London with supplies of wood to rebuild the city after the Great Fire of London (1666). Giovanni Antonio Scopoli noted their presence in Carniola (roughly equivalent to present-day Slovenia) in the 18th century.

Prior to the mid-twentieth century, bedbugs were very common. According to a report by the UK Ministry of Health, in 1933 there were many areas where all the houses had some degree of bedbug infestation. Bedbugs were a serious problem during World War II. General MacArthur commented that bedbugs are the "greatest nuisance insect problem...at bases in the U.S." With the arrival of potent pesticides, famously DDT in the 1940s, bedbugs almost disappeared in western countries. However, bedbug infestations have re surged in recent years, for reasons which are not clear but contributing factors may be complacency, increased resistance and increased international travel. 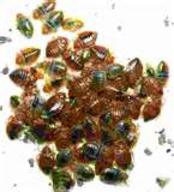 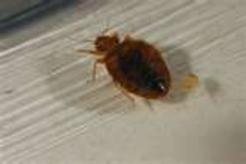 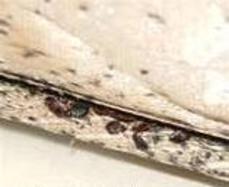