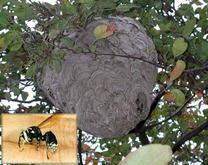 Mature Yellow-jacket nests (colonies) can contain 1000-2000 adults. Their  nests can be found in wall voids,in holes in the ground,in attics,hollow trees,under decks etc. They are a very aggressive wasp & will attack in numbers when disturbed. If a nest is located in a wall void-DO NOT SEAL THE EXIT HOLE WITH CHALK OR SPRAY OVER-THE-COUNTER INSECTICIDES INTO THE OPENING.THIS WILL DRIVE THE YELLOW-JACKETS INSIDE YOUR HOME.

Bald-Faced Hornets build rounded nests on trees , shrubs, under decks or on the exterior of buildings. Mature nests can be as large as a football or larger & can contain up to 1000 adults. This a very dangerous & aggressive insect & will attack in numbers when disturbed. Stings are extremely painful! It is strongly advised that these colonies be tackled & removed by professionals.

Umbrella Wasps build upside umbrella nests under decks,on exterior of buildings,
around windows, inside mailboxes, grills, lights, attics, under decks or virtually any spot that will offer protection. It is not uncommon to find up to a dozen or more of these nests on one property. Mature nests can contain up to 100 adults per nest. Umbrella wasps will sting if an individual is in the vicinity of their nest.

Although they have they ability to sting they are the most placid of the stinging insects. Providing they are not abused they will go about their very important business as pollinators.The goal is to preserve these beneficial insect whenever possible. Wild Honey Bees most often colonize hollow trees,hollow wall voids,attics etc.. When Honey Bees become established inside the cavity of a building this can be a problem due the large size of the colonies (10,000-80,000 individuals). When an existing colony splits, the honey bees that leave the nest are referred to as a swarm. Homeowners will sometimes suddenly discover thousands of honey bees resting on a tree branch or an exterior surface on their property. This is a swarm that is resting before moving on to their destination. Honey Bees in a swarm are very docile & unlikely to sting because at this stage there are no young or food stores to protect.Honey Bee swarms that are resting in an open area should not be disturbed & will leave within a few days or less if left alone!

Bumble Bees build nests underground,in compost heaps,or in walls/ceilings of      basements etc.. Mature colonies can contain more than 100 individuals. While not as aggressive as yellow-jackets,wasps or hornets,they will defend their nest & can deliver a painful sting. With Bumble Bees, it is possible for a colony to remain in the same location as the previous year.

Carpenter Bees are the bees that drill into softwood timbers,such as cedar,leaving perfectly round holes (3/8 inch in diameter). Wood inhabited by these bees can deteriorate over time. These bees are territorial & the male in particular will "dive bomb" at intruders when it feels the nest is threatened. The male does not have the ability to sting,though the female does. The Carpenter Bee confines its boring to external wood timbers,so there is no concern internal damage will occur. Carpenter Bees are similar in appearance to Bumble Bees. However, their abdomen does not have the fuzzy yellow hair visible on the Bumble Bee. The Carpenter Bee is a solitary bee,but if a building offers suitable timber,it can attract several individuals,each with its own nesting tunnel.If allowed to go from year to year,the number of Carpenter Bee tunnels can become substantial.