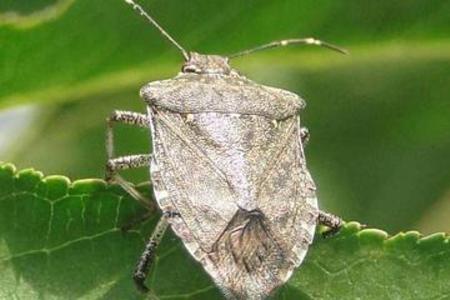 The brown marmorated stink bug (BMSB), an insect not previously seen on our continent, was apparently accidentally introduced into eastern Pennsylvania. It was first collected in September of 1998 in Allentown, but probably arrived several years earlier. As of September 2010, BMSB has been recorded in 37 counties in Pennsylvania, although it is probable that they are in all counties in Pennsylvania. It is also recorded from many other states throughout the U.S.

This true bug in the insect family Pentatomidae is known as an agricultural pest in its native range of China, Japan, Korea and Taiwan. Recently, the BMSB has become a serious pests of fruit, vegetables and farm crops in the Mid-Atlantic region and it is probable that it will become a pest of these commodities in other areas in the United States.

BMSB becomes a nuisance pest both indoors and out when it is attracted to the outside of houses on warm fall days in search of protected, overwintering sites. BMSB occasionally reappears during warmer sunny periods throughout the winter, and again as it emerges in the spring. Adults are approximately 17mm long and shades of brown on both the upper and lower body surfaces (25 mm = 1 Inch). They are the typical "shield" shape of other stink bugs, almost as wide as they are long. To distinguish them from other stink bugs, look for the lighter bands on the antennae and darker bands on the membranous, overlapping part at the rear of the front pair of wings. They have patches of coppery or bluish-metallic colored puntures (small rounded depressions on the head & pronotum. The name "stink bug" refers to the scent glands located on the dorsal surface of the abdomen & the underside of the thorax. The eggs are elliptical (1.6 x 1.3mm), light yellow to yellow-red with minute spines forming fine lines. They are attached, side-by-side, to the underside of leaves in groups of 20-30 eggs. There are 5 nymphal instars (immature stages). They range in size from the first instar at 2.4mm to the fifth instar that is 12mm in length. The eyes are a deep red. The abdomen is a yellowish red in the first instar & progresses to off -white with reddish spots in the fifth instar. Protuberances are found before each of the abdominal scent glands on the dorsal surface. The legs,head & thorax are black. Spines are located on the femur,before each eye, & several on the lateral margins of the thorax.

This species probably has a single generation per year in Pennsylvania depending on the temperatures. Warm spring & summer conditions could permit the development of two or three generations. In parts of sub-tropical China, records indicate from four to possibly six generations per year. Adults will emerge in the spring (late April to mid-May), and mate & deposit eggs from May through August. The eggs hatch into small black and red nymphs that go through five molts. Adults begin to search for overwintering sites starting in September through early October.

In its native range, it feeds on a variety of hosts plants. Fruits attacked includes apples, peaches, figs, mulberries, citrus fruits & persimmons. This true bug has also been reported on many ornamental plants, weeds, soybeans & beans for human consumption. Feeding on tree fruits such as apple results in a characteristic distortion referred to as "cat facing" that renders the fruit unmarketable as a fresh product.

This insect is becoming an important agricultural pest in Pennsylvania. In 2010, it produced severe losses in some apple & peach orchards by damaging peaches & apples. It has also been found feeding on blackberry,sweet corn,field corn,soybeans, lima beans, green peppers & tomatoes.

These insects are not known to cause harm to humans, although  homeowners become alarmed when the bugs enter homes & noisily fly about.The stink bug will not reproduce inside structures or cause damages. Mechanical exclusion can help to keep stink bugs from entering homes & buildings.Cracks around doors & windows, siding ,utility pipes,behind chimneys, & underneath the wood fascia & other openings should be sealed with good quality silicone or silicone-latex chalk. Damaged screens on doors & windows should be repaired or replaced.Exterior applications of insecticides can help reduce the number of stink bugs entering structures-but treatment must be performed late August through September to be effective.

Insecticide treatments performed after stink bugs have entered wall voids are not effective at preventing them from emerging. Although aerosol-type pyrethrum foggers will kill stink bugs that have amassed on ceilings & walls in living areas, it will not prevent more of the insects from emerging after the room has been aerated.For this reason use of these materials is not considered a good solution to long-term management of the problem.Spray insecticides, directed into cracks & crevices, will not prevent the bugs from emerging & is not a viable or recommended treatment.